The Legend of Saint Francis & the Wolf of Gubbio

There was in Italy the town of Gubbio, a prosperous village that had a great problem. A wolf was eating their livestock, and attacking the people. Nothing the townspeople did protected them from the wolf. Never had they seen such a fierce predator. He killed a shepherd, then the shepherd’s brother and father when they went out to deal with this menace. The next morning the town was abuzz with the story told by the shepherd’s mother and sisters.

The mayor of Gubbio announced he would send three of his best guards to find and slay the wolf that very afternoon. At dusk the townspeople could hear shouts and clashing of metal from the woods. Then it was quiet. The guards had met the wolf.

Late in the night the only survivor of the encounter struggled into the anxious town and collapsed. After he was revived, he told his tale of their fight with the fierce and powerful wolf. As the story rushed through town the wolf grew larger and more ferocious. Fear was in the eyes of everyone in Gubbio. Children were kept close by, weapons at the ready and the defenses of the town raised. The mayor consulted with his advisors and decided to see if Francis of Assisi could help them. They had heard that he could talk to animals and that God talked to him.

Several brave messengers were sent to find Francis and ask him for his help. They had the good fortune to find him in Assisi at the house of Bernardo Quintivalle, his first follower. They told him of the tragic attacks of the wolf and how the frightened people were almost in a state of siege. They thought Francis was the only one who would be able to help them. They begged the simple Holy man to help and implored him to come with them right away.

Francis was moved by their plight and wanted to do what he could. He said they could leave in the morning and they should eat and rest with his Brothers that night. After dinner they prayed with Francis for a solution and slept that night with hope in their hearts. Dawn found them walking down the hill from Assisi on their way to Gubbio. In time they arrived at the woods near the town. The messengers pointed to where the wolf had slain the two guards not far from the road. They stayed in a tighter group as they hurried the rest of the way, watching for the wolf.

The gate to the town was opened as they arrived and was quickly closed behind them. The entire town followed Francis to the town square where the Mayor eagerly met them. They went into the town hall to eat and discuss what Francis would do with the wolf.

The mayor wondered what Francis could do with such a challenge. The mayor hated that wolf. He knew the men who were killed and their families. One of the guards was a cousin to the mayor’s wife. If he were younger, he would have led the guards after the wolf. He wanted Francis to strike the wolf dead or send him to the town of Spoletto, their old enemy. Either would satisfy a need for revenge and stop the attacks.

Francis listened as the mayor described what had happened to their peaceful town. He had much empathy for the families of the victims and wanted to meet the wolf and hear his story, too. Francis stated that the next morning he would go the woods where the guards had been killed to see if he could find the wolf. That night he prayed for the wisdom to find a solution that would benefit everyone.

Early the next morning, refreshed and confident this would work out, Francis was accompanied by the townspeople to the gates of Gubbio. They wished him well and retreated to their homes, worried that Francis would share the fate of the shepherds and guards.

He walked on to the woods, ready to engage the wolf. As he neared the first stand of trees, the wolf appeared and began to stalk Francis. His slow, deliberate steps, the walk of a predator, announced his intention. He drew nearer and nearer, closing in a circle around the holy man from Assisi.

Seeing the wolf, Francis felt a connection. He made the sign of the cross and called the wolf to meet him in peace under the grace of the Lord. The wolf watched as Francis came closer. “Come Brother Wolf, I will not hurt you. Let us talk in peace.” The wolf froze in mid step. The wolf struggled with doubt and uncertainty. Finally, understanding that Francis meant him no harm, the wolf walked to Francis and sat back on his haunches, ready to listen. 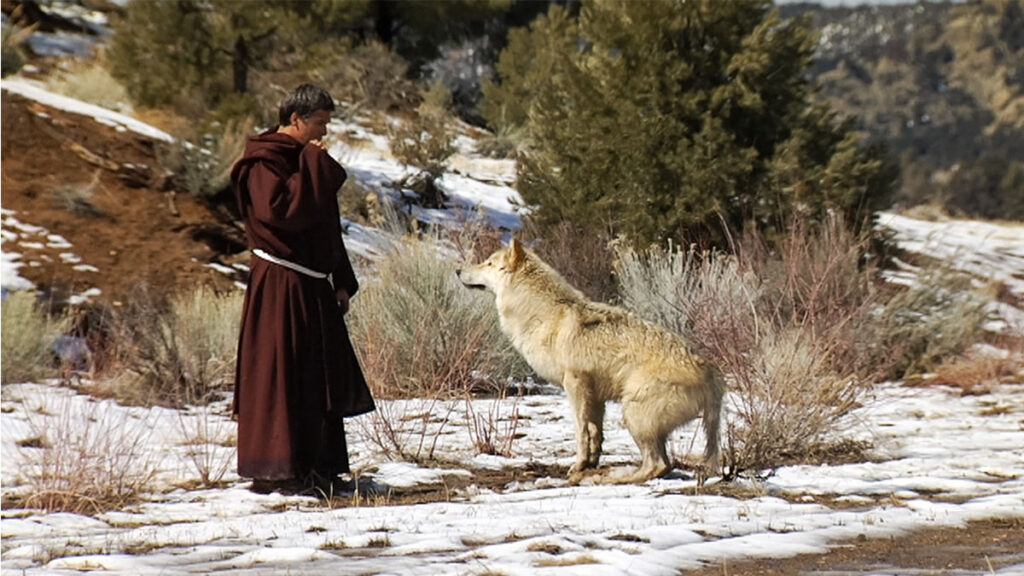 Francis told the wolf that he had come from Gubbio and described what the townspeople were experiencing because of the wolf’s actions. He described the pain and resentment they held toward the wolf. “How did this come to happen?” Francis asked the wolf. “Why did you kill the livestock and people?”

The wolf told Francis his story. He had been left behind by his pack because he was injured and couldn’t keep up. He could only catch prey that didn’t run fast, like sheep and goats. He really preferred to eat deer and rabbits, but, with his injured leg, that was out of the question. He explained to Francis that all he wanted was to eat when he was hungry.

Francis implored him to explain his actions. The wolf continued. The first shepherd he had killed was trying to protect his flock and the wolf had no choice but to fight back and kill him. That afternoon two more men came after him and instinct took over. He quickly killed them, leaving their bodies where they fell. The next day the three guards came hunting him. He was only defending himself when he fought them. Two were slain. As the third man was no longer a threat, he let him go.

Francis could see that the wolf was only acting to fill his needs. He had made unfortunate choices that affected people of whom he knew nothing. Through Francis the wolf was able to feel the pain of the people in Gubbio and he felt remorse. He was sorry for the pain he had caused, but he needed to eat. What could he do?

Hours passed as Francis prayed. The wolf watched closely, not fully understanding what was taking place, but sensing that Francis believed he felt remorse at having caused such pain. When Francis emerged from his contemplation, he quietly suggested an answer to the dilemma. It was a suggestion that could meet the needs of both the town and the wolf. He proposed to the wolf that the townspeople could feed him and, in return, the wolf would stop killing the people and their livestock.

The wolf thought this would work well for him, but worried the people would still want to kill him. Francis understood the wolf’s concern and assured him he would present the idea to the townspeople in such a way that he would be forgiven and welcomed into the town. He knew they could let go of their fear and hate if they saw the wolf ask for forgiveness and accede to a peaceful relationship. Francis extended his hand. The Wolf showed agreement by placing his paw in Francis’ hand.

Saint Francis and the wolf walked back to Gubbio. As they neared the gate, the citizens could not believe their eyes. Francis and the wolf continued to the town square, although the mayor and the entire town watched with hate and fear. The wolf had to keep his eyes on Francis to still his fear.

Francis called out, “Come countrymen, the wolf will not hurt you. Let us talk in peace. I have spoken with the wolf and he apologizes for his actions and wants to make amends.”

Francis told them the wolf’s story. “He has the same needs as you and only wants to eat and not go hungry. Can the people of Gubbio feed him if he promises to never again take the lives of the people and their animals? Remember, our Savior taught forgiveness. He taught us to love our enemies.”

The citizens returned skeptical stares. Francis continued, “This will be your wolf. He can’t be killed or passed off to Spoletto or Perugia. He will serve the town as a defender as long as he will live.”

The citizens of Gubbio asked Francis to talk privately with them, to help them understand his suggestion. The Mayor guaranteed no one would hurt the wolf while they conferred.

The people of Gubbio talked with each other for hours. Relatives of the dead were the hardest to convince. They harbored a hard place in their hearts for the wolf. Francis wept with them and touched them in a way that softened their hearts. Finally, after many tears, they found compassion for the wolf. At Francis’ suggestion, they addressed him as Brother Wolf.

The wife of the shepherd, the man who was the first to fall, brought out food to feed Brother Wolf. She was crying in relief to have the burden of hate lifted from her spirit. Brother Wolf was humbled when he found his apology accepted. More food was brought out and soon everyone was eating together.

Word spread to other towns. Soon the people of Gubbio were proclaiming proudly that they had a special wolf, Brother Wolf. He lived another two years like that until he died, cared for by the generous and forgiving town of Gubbio. Begin your peacemaking journey with our manuals.
View our Books