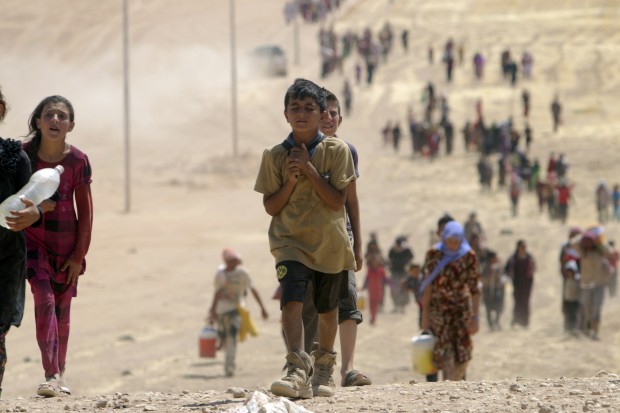 Did you hear about the Christian children who were beheaded in Iraq? Four of them accepted martyrdom rather than renounce Jesus. The Vicar of Baghdad, Canon Andrew White, tells the story this way:

“Islamic State turned up and said to the children, you say the words that you will follow Mohammed. The children, all under 15, four of them, said ‘No, we love Yesua (the Iraqi name for Jesus), we have always loved Yesua, we have always followed Yesua, Yesua has always been with us.’”

After asking the children once more to convert and once more receiving their refusal, ISIS militants beheaded them.

The Least of These

Unfortunately, the beheading of four innocent children is hardly an isolated incident. According to the Jerusalem Post, More than 250,000 Christians have fled Iraq in the face of persecution at the hands of the Islamic State, which is now using Christian churches in Mosul as prisons. Christians in the region have been driven out, persecuted, systematically exterminated.

Canon White goes on to say that Christian families who fled Baghdad to escape violence there found themselves face to face with ISIS in their traditional home of Nineveh. “They killed huge numbers, they chopped their children in half, they chopped their heads off, and they moved north and it was so terrible what happened,” he said.

The Reality of Evil

Evil. Enemies. Those are words we don’t hear often this time of year. Usually we hear other words. Words like joy, merry, greetings, happiness, and hope. Perhaps, as Rev. Rutler says, that’s because Christmas, with its hallowed and sometimes shallowed joy, has swallowed Advent, with its emphasis on Death, Judgment, and Hell. Or perhaps it’s because Advent is indeed a season of hope. A season of joy and anticipation. A time of watching and waiting.

Indeed, strange as it may sound to our ears, evil is at the heart of Christmas. We might even ask if there would be a Christmas without evil, or at least if we would have so much cause for joy, because without evil there would be no need for deliverance, no need for hope. It is only because we live in a world consumed with wickedness that we have reason to proclaim:

come and shine on those who dwell

in darkness and in the shadow of death.

Over at his blog, Standing on My Head, Dwight Longenecker also reminds us to remember the shadowy side of life when he says, “in this winter season we also ought to face the facts of the grim reaper.” Yes, and let us face the facts of evil, if only because too often people ignore it, underestimate it, pretend it doesn’t exist, pretend it’s just a metaphor or an archaic concept that has outlived its usefulness. If ISIS has shown anyone with eyes anything, it is that evil exists.

Unfortunately, these days it can seem as if evil doesn’t merely exist, but triumphs. It can seem as if the whole world is consumed by evil, or at least by those who turn a blind eye to it and therefore enable it. Sometimes it can seem, to those who are paying attention, as if the darkness has overwhelmed this abode of man.

We have hope. We know that however powerful evil may seem at the moment, however triumphant it may appear in this world, it does not and will not have the final word. We sing with joy because know the end of the story, even if we have not yet turned the page. We have hope because Jesus came to free us from sin, and he will come again to defeat evil once and for all. Jesus came to lead us out of the darkness.

Perhaps that’s why I started this post with such a gruesome story, to remind us what we’re up against, so that we can remember what we hope for. As Pope Emeritus Benedict once said, let us be full of hope and allow “for that final unforeseen in-breaking of God to set the soul free from the clutches of evil and destructive men.” Because in the end it is only God who can free us from the evil in our hearts and from the evil in the world.

Let us take advantage of this season to remember: that which we long for beyond all else, whether we know it or not, is coming. Stay awake! Be prepared! The Kingdom of God is drawing near. Emmanuel will return. Let us remember the martyred and persecuted Christians, if only to remember what it is we are waiting for: the God who will finally “set us free from the hand of our enemies, free to worship him without fear, holy and righteous in his sight all the days of our life” (Luke 1:73-75).

Let the rest of the world shout Season’s Greetings between ceiling-high shelves of fluorescent-lit plastic toys. We will sing marana tha.