Peace Be with You Podcast

Episode 2: The Assisi Option, an Introduction 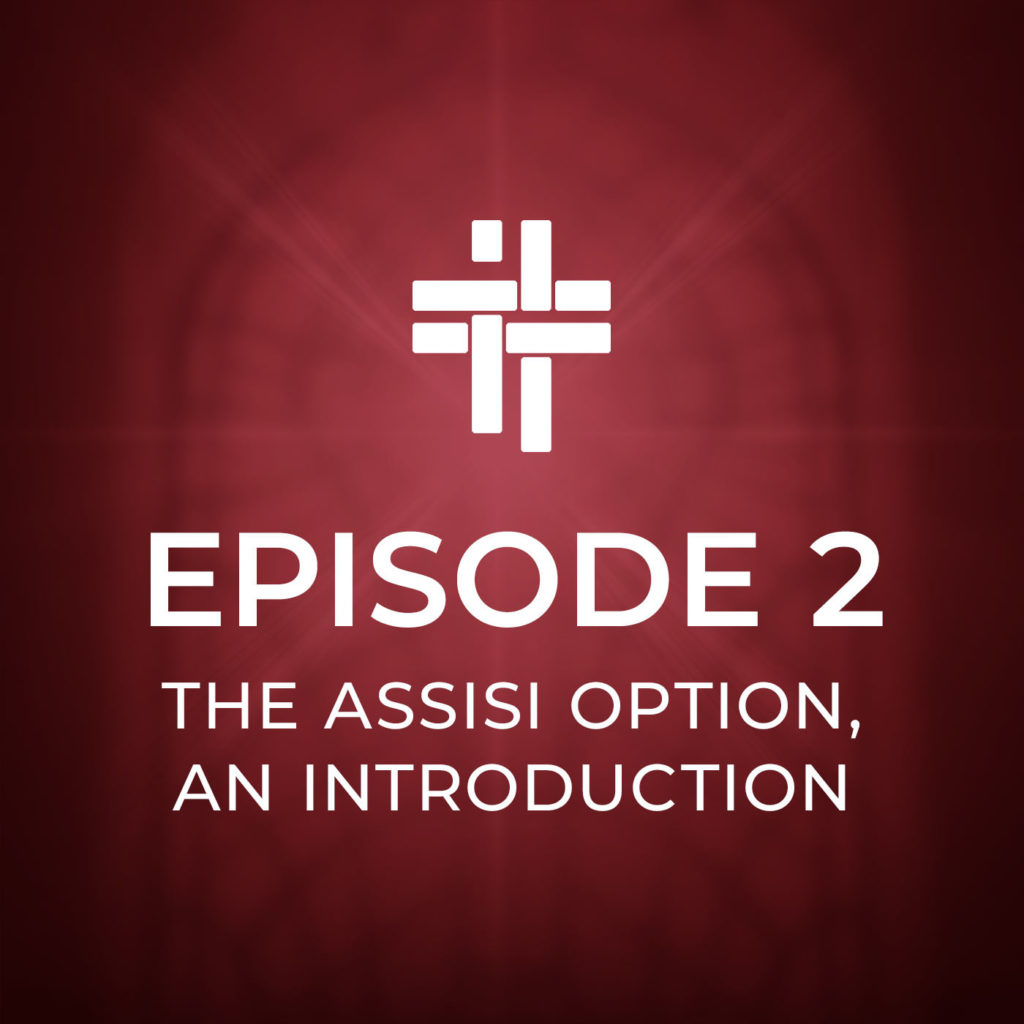 The Assisi Option addresses the clash between people of faith and a secular culture. It calls for the creation of spiritual direction centers for mediation, pastoral counseling, and spiritual direction. Inspired by the legacy of Saint Francis, participants will alternate between hermitage and ministry. As contemplatives, they will nurture the Peace of Christ. They will engage in robust faith-based reconciliation and become instruments of peace.

“Angel Share” and “On My Way” by Kevin MacLeod (incompetech.com) Licensed under Creative Commons: By Attribution 3.0 License

Episode 2: The Assisi Option, an Introduction

An Introduction to the Assisi Option

Welcome to the second episode of Peace Be With You. Today we will consider the Assisi Option – a plan for addressing the clash between a culture of faith and a secular culture.

There are many times when that seems to make good sense. The Benedict option is appealing. Often I have thought it was time to pack up the family and head for an isolated monastery. Nonetheless, upon reflection, I have began to doubt the wisdom of the monastic solution for this age. A wholesale retreat into monasticism stands in direct opposition to Christianity’s core mission – going forth to the ends of the earth to convert souls.

It also occurred to me that the current imbalance – between the culture of faith and the secular culture – has been the result of a steady retreat of the faith that has taken place over the past two hundred years. So perhaps there is a better solution. Rather than retreat into monasticism, it may be time to advance as disciples and spiritual warriors.

However, if we wish to advance, we will need to field a highly trained spiritual army. In fact, perhaps it was the lack of such an organized fighting force that first gave rise to the desire to retreat behind monastery walls. Perhaps the Benedict Option was a symptom of an absence of trained disciples.

And perhaps the lack of a sound theology was partially to blame. Perhaps a lack of a robust theology over the past couple hundred years created a fear of engaging the culture. When Christians discovered the spiritual weapons they wielded were ineffective, they were forced to retreat, powerless to defend against the cultural assault. Thus, any valid option for our age would need to include arming Christians with effective theological weapons.

In our search for these powerful spiritual weapons, we may want to consider Franciscan spirituality, with its roots in early church theology. For example, Saint Bonaventure, who studied at the Academy in Paris at the same time as Thomas Aquinas, departed and took a different route – he took the contemplative path. He returned to the cave on Mount LaVerna where Francis had spent time in hermitage.

Ironically, Aquinas, later in his life, came to agree with Bonaventure regarding the superiority of the mystical path. When Bonaventure left Paris, hermitage had already become a key part of the Franciscan tradition. Initially, this came about when Saint Francis of Assisi was torn between a life of monastic seclusion and a life of public preaching.

Saint Clare convinced Francis to choose both — periods of hermitage alternating with periods of preaching. Thus, Franciscans are friars, not monks.

This Franciscan model — contemplative life alternating with evangelism — has value for us today. Alternating hermitage and preaching may be the best way to address the current woes of Christians.

In the Assisi Option men and women enter into the crucible of contemplative prayer. They are infused with the Holy Spirit. This allows them to go forth, two by two, to preach and minister and infuse the world with Spirit. Their advanced state of being-in-love conveys the truths of divine relationship to everyone they meet.

They function as peacemakers, like Saint Francis. Their pastoral counseling brings healing to others. They convey love and wisdom that facilitates the conversion of souls and places souls on the path to salvation.

Their personal divine relationship — their state of being-in-love — draws others into relationship with Christ. For example, during Eucharistic communion, as they encounter God humbly bending low to greet them, others follow their gaze and discover the miracle of the Real Presence.

No doubt, during peacemaking, healing, and ministry, they will suffer wounds common to the spiritual battlefield. Thus, they must make repeated visits to the cave for hermitage, for renewal, and for healing. During these periods of hermitage other contemplatives will be dispatched in their place to serve the parish.

At last the vital task of evangelism will be in the hands of contemplatives prepared for success. They will overcome cultural challenges that first prompted the Benedict Option.

This plan has an important precedent. During hermitage on Mount LaVerna, Francis and Bonaventure both found mystical union with Christ. Prayerful contemplation generated their profound works of spirituality, which will also serve as resources for our effort.

Participants in the Assisi Option will not travel to exotic or remote locations. Nonetheless, they will seek deep spiritual transformation that fosters mystical union. Marrying faith with reason, they will grasp the deeper truths of Creation. They will straddle this world and the next.

Rather than retreat to the hills to live a cloistered life – while the world experiences wholesale destruction – contemplatives will engage the culture. They will hasten the advent of the Peace of Christ and nurture the salvation of souls. They will minister where they find the greatest need; in the majority of cases, they will serve the nearest parish.

In the next few episodes we will look closer at each of these disciplines.

Let us not secret the faith away, as though it were a prize we alone have won. Let us go forth to bring the Gospel to all corners of the world.