Conflict is brewing at the Vatican. When the Pontifical Academy for Sciences took up the Climate Change cause in concert with U.N. leaders and political activists with a history of opposing Catholic teachings, battle lines were drawn, the flames of conflict were fueled, and Catholic unity was threatened. As a result, criticism greeted Pope Francis’ anticipated encyclical on the environment […] 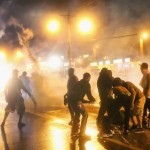 Guest post by Lindsay Stone Police Tie 62 Yr Old Florida Vacationer to Chair & Pepper Spray Him to Death That’s the headline that greeted me this evening as I logged onto Twitter, that along with a slew of other inspiring messages such as Cop Turns Off Dashcam to Beat & Tase 66 Yr Old with Dementia. Raindrops were falling […]